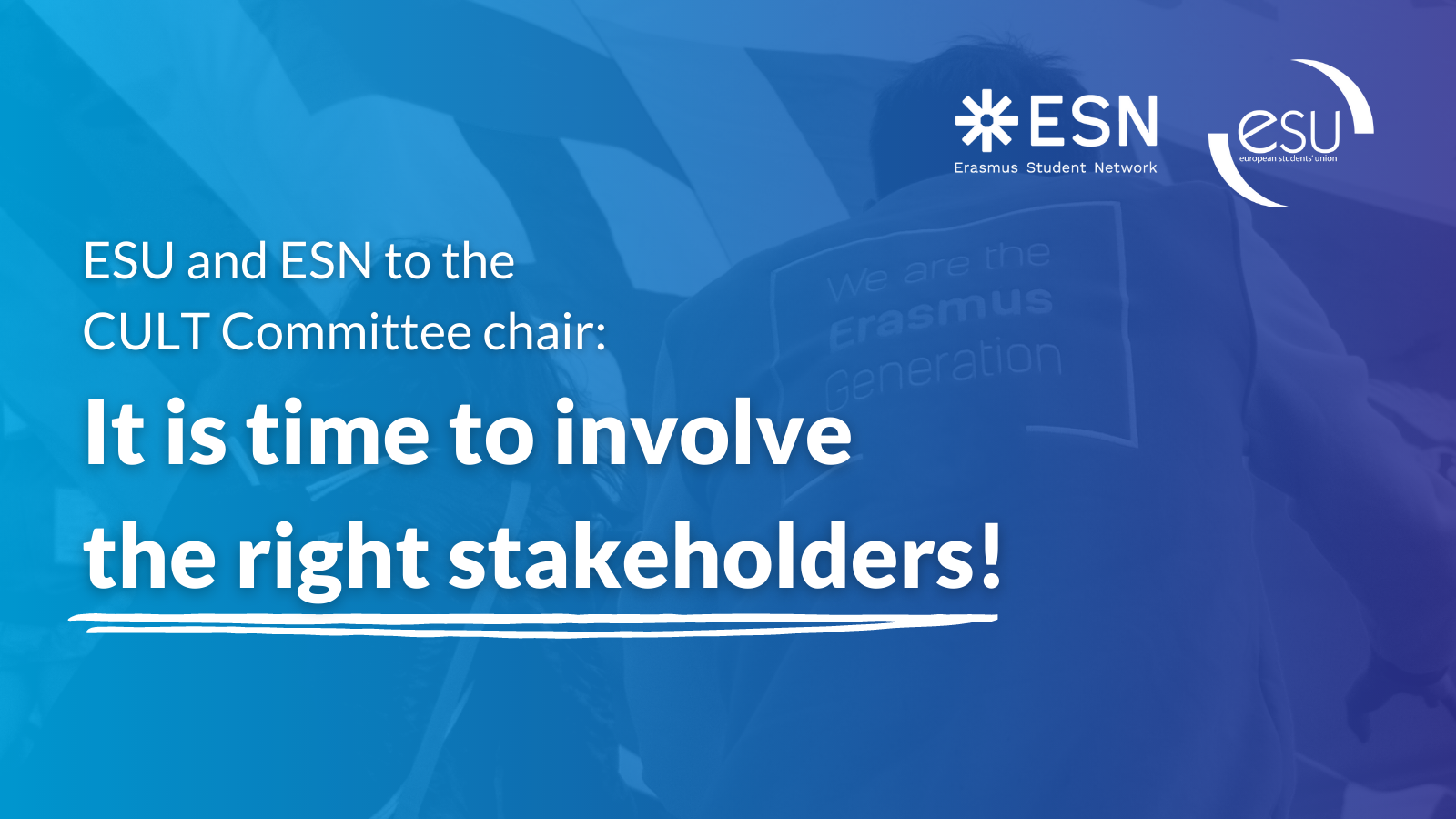 The European Students’ Union and the Erasmus Student Network to the European Parliament CULT Committee chair: it is time to involve the right stakeholders!

The European Students’ Union (ESU) and the Erasmus Student Network (ESN) are deeply concerned and criticise the approach of the president of the Committee on Culture and Education of the European Parliament regarding the involvement of student stakeholders in the public hearing of the Committee on the relationship between Erasmus+ and the United Kingdom, following Brexit.

On the 15th of June, the European Parliament Committee on Culture and Education together with the Committee on Petitions organised a public hearing on the issue of the United Kingdom’s withdrawal from Erasmus+ and the effects of this troublesome decision on students from the UK and Europe as well.

The European Students’ Union represents 20 million students across Europe through its 45 national unions of students across 40 countries; the Erasmus Student Network, with its 520 local sections in 41 countries, is the voice of the Erasmus generation. Our organisations are recognised as stakeholders by the European Commission, national governments and Erasmus+ National Agencies. Both our organisations and our national members have extensively worked on the topic (e.g. Securing an EU-UK agreement on future participation in the Erasmus+ programme: a reminder that international opportunities for students are at the heart of any association agreement), sharing insights from the grassroots level with a European perspective as well. Even though ESU and ESN are decisive stakeholders on the matter, both in terms of legitimacy and policy, our organisations were not invited to the public hearing.

What is more concerning than European student organisations being side-lined is that no representative student organisations from the national level were invited either. To present stakeholders’ perspective, a representative of RCDS (the student wing of CDU, the German party of Ms Sabine Verheyen, chair of the Committee on Culture and Education) was invited instead. If the interest was to invite local or national unions, in order to focus on their experience, national unions of students like NUS UK or fzs from Germany and ESN national organisations from the same countries could have been invited. Inviting the national student wing organisation of the party of the chairwoman to speak as the student voice at a public hearing instead of party-independent transnational and democratically elected representative organisations is, unfortunately, a clear sign of tokenism, especially since our concerns were raised directly to Mrs Verheyen, who hasn’t replied to this date.

With the sharp decrease in student mobility between the UK and the European Union, the new challenges for students from both sides to be considered as ‘third-country students’ for their tuition fees, the uncertainties of the new UK mobility schemes, of the future of British Higher Education Institutions inside the European Universities alliance and of academic cooperation between the UK and the EU, consulting the right stakeholders is crucial for policymakers and the European public opinion to get a clear perspective of the situation and take informed decisions.

If the chair of the Committee on Culture and Education aims to hear the voice of the students in these proceedings, a change of approach is needed: ESU and ESN are ready to work closely and constructively to present students’ struggles, needs and proposals.