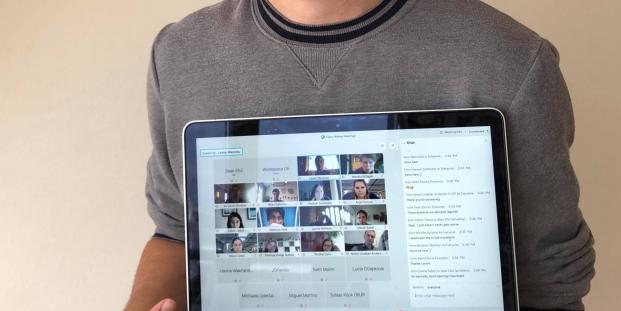 The EU Youth Conference took place between the 2nd and 5th of October, in a digital format, streamed from Berlin, Germany.

As a network, ESN is one of the few International, Non-Governmental Youth Organisations which are entrusted with the responsibility of taking part in the EU Youth Dialogue process, which is a European-wide youth consultation process organised by the EU Commission’s office for Youth & Education, and the EU Presidency ‘trio’.

The first semester was organised by the German Presidency and focused on Youth Goal 9 “Space and Participation for All”, collecting data from hundreds of participants, working groups and youth organisations from all across the continent.

"This year we're celebrating 10 years of EU Youth Dialogue. We have reason to be very proud. The Youth Dialogue can be a vehicle to bringing young people to the table. We need you." -@ChristophidouEU, Director-General at the European Commission for Youth via video #YouthConf pic.twitter.com/pue195EeqM

Representing the Erasmus Student Network in the process was Sean Ellul, Liaison Officer to the European Youth Forum and member of ESN Malta.

As an organisation, being involved in such a space is paramount to the external advocacy work, as it empowers ESN with a seat at the dialogue table with European decision-makers. Being directly involved in high-level consultation processes allows our organisation to voice the thoughts, concerns and opinions of the Erasmus generation, to influence the direction of some of the highest levels of youth-policy in Europe, and brings the opportunity to share our work and best practices with a multitude of organisations, institutions and young people across the continent.

"Politicians must lose the fear of young people. The processes must be clear. Let's make them stronger. Participation is a right, not an option. Youthless policy is useless policy." -@TobiKoeck, President of @dbjr_ at #YouthConf pic.twitter.com/fa8Ac6s64j

The results of the EU Youth Conference are to be handed over to political decision-makers in Europe.

Read more about the event on the German Federal Youth Council’s website.