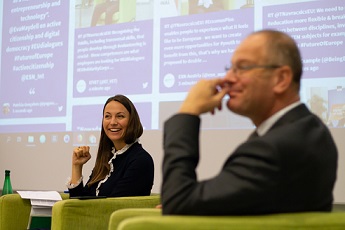 On the 9th of October at the Vrije Universitat Brussel (VUB), the Erasmus Student Network organised a Citizens' Dialogue with Tibor Navracsics (European Commissioner for Education, Culture, Youth, and Sports), Eva Maydell (Member of the European Parliament), Sixtine Bouygues (Deputy Director-General for Communication of European Commission) & Karl Müller (Austrian Presidency of the Council of the European Union) to discuss active citizenship among youth.

"#Volunteering shouldn't be something extraordinary, but a regular part of the society. It is extremely important and it should be nurtured from an early age" - @EvaMaydell #EUdialogues #ErasmusUpgrade

The full recording of the event is available here while the photographs can be seen here.